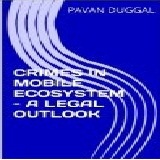 This eBook “Crimes in Mobile Ecosystem – A Legal Outlook” examines the emerging concept of mobile crimes and also the various kinds of mobile crimes that have emerged at the time of writing. It has further taken jurisdiction of India as an illustration and has sought to examine as to how mobile crimes have been appropriately addressed under the Indian Cyberlaw prevailing for the time being in force, being the Information Technology Act, 2000 as amended by the Information Technology (Amendment) Act, 2008. It has also examined the ambit of how mobile crimes are also sought to be covered under the existing Penal Code in India.

Clearly at the time of writing, the entire concept of mobile crimes is only beginning to evolve. New and different kinds of mobile crimes are beginning to emerge. The jurisprudence on mobile crime is also likely to develop and evolve over time. Mobile criminals are giving the warning to the governments of the world that there will be a need for constantly upgrading and modifying the existing laws so as to make them in sync with the requirements of the time. Further, as time passes by, countries of the world would also like to address the issue of regulating mobile crimes through legislation and other means.

More about the e-book is available at http://goo.gl/lisFrF