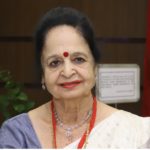 Mrs. Kusum Duggal is the Vice Chancellor of Cyberlaw University, an internationally known Online University which is specifically dedicated to the study of Cyberlaw and related legal issues.

Mrs. Duggal is currently working hard to establish the University with a wider perspective. The honour of establishing University has been entrusted to her because of her passion to work endlessly and take the University to greater heights. She has compelling leadership qualities and has the knack of taking faculty alongwith her to put in their best. She has indeed an aura about herself that she touches hearts and inspires minds.

A distinguished academician and administrator, Mrs. Duggal started her career as a teacher in Delhi Public School of DPS Society, one of the prestigious societies in India in 1960. She has had a successful tenure of nearly five decades and since then, she has been regularly contributing to the evolving standards of excellence in education.  Her strong willpower, calibre, conviction, dedication and leadership qualities contributed in modernizing the revitalizing the school education system to the extent that she was selected to represent India in the United States under the Government of India Exchange Programme for Teachers in 1976.

Mrs. Duggal has always endeavoured to bring new educational approaches and methodologies to uplift the cause of school education and capacity building. She is of the view that in the present scenario, there is a need for the teachers to be regularly updated and trained and motivated.  Mrs. Duggal believes that in today’s world, education has to be an ongoing phenomenon.  She is a strong believer of the thought process that the existing traditional education is good and will continue.  However, with the changing wings of today’s time and with transient new developments taking place, it is absolutely imperative for any person to keep on updating his knowledge and skills set up by constant education and professional developments. She has been contributing to the cause of uplifting the school education in India. Her thrust has been into generating responsible, confident and self-reliant students for a better world.

Mrs. Kusum Duggal is convent educated. She did her graduation from University of Delhi and Bachelors of Education (B.Ed) from Punjabi University topping in her college and was awarded “All Round Best Student Award” by the gracious hands of the then Governor of Punjab.  She further completed her Masters in History from Punjab University. She did Diploma in “Skills for Effective Teaching” and also “Administration and Supervision of Schools” from Maryland University, USA.

Mrs. Duggal is the celebrated author of books for children. She has written 18 books for school children on different subjects and she has her own publication house viz. Saakshar Publications.

As a speaker and with specialization in History, she has been invited by various educational institutions for lectures and discussions and talked about number of cutting-edge issues on education. She has participated in several international and national conferences, seminars and workshops on issues related to education. She has been associated with the Managing Committees of several schools in India. She was responsible for starting Student Exchange Programme with France and UK.

Her impeccable and proven track record as an able and visionary administrator has enabled her to excel in her leadership role. A fact acknowledged by many prestigious awards that she has been conferred with. Mrs. Duggal has been extensively decorated with various awards, honors and distinctions in her educational career spanning nearly five decades. She is the recipient of the awards, “All Round Best Student of the Year” in training college in 1959. She was awarded by the Maryland University for topping in two Diplomas entitled “Skills for Effective Teaching” in 1976 and also “Administration and Supervision of Schools” in 1977. She received the Government of India State Award in 1992. She was further awarded with Bharat Nirman Award in 1993. She received Rotarians of India Excellence in Education Award in 1994, besides eleven other prestigious awards.

Her contribution in Delhi Public School ecosystem has been well documented. An educationist who has distinguished reputation in starting new schools, Mrs. Duggal as an educationist, has relevant skill-sets to start new ventures. That is why her passion for education finds a new avenue in the form of Cyberlaw University. Cyberlaw University is honoured and privileged to have an eminent educationist as its Vice Chancellor.