Cyberlaw University® > Books > APPIFICATION OF SOCIETY AND THE LAW 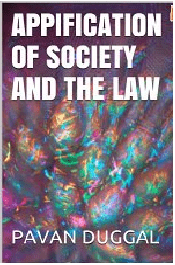 The last one decade has witnessed an exponential boom in the adoption of mobile devices. With each passing week, new kinds of mobile models are coming up and the adoption is getting increasingly more prevalent. The advent of smart phones and mobiles have ushered us in the era of mobile applications or mobile apps. Today, more and more people are downloading mobile apps on their mobile phones.

The eBook looks at the various legal, policy and regulatory issues concerning this phenomenon. Being the first of its kind in its genre, the book seeks to unravel the legal ramifications of appification of society and how appropriate regulatory and policy issues concerning appification of society have to be addressed and kept in mind by the relevant stakeholders as we move forward.

More about the book is available at http://goo.gl/blYECM